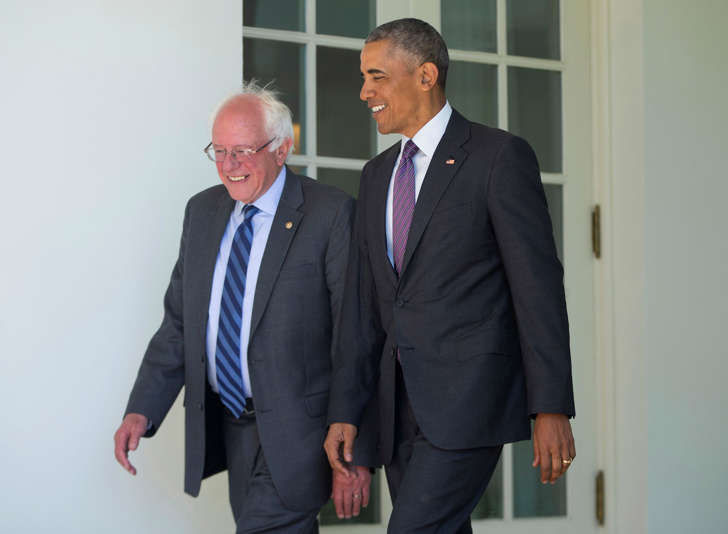 
After meeting with Obama, Sanders said he is looking forward to working with Clinton to defeat Trump in the fall.

President Obama offered his formal endorsement of Hillary Clinton
with a video Thursday and plans to campaign with the former secretary of
state in Wisconsin next week, efforts aimed at speeding the Democratic
Party’s unification around its presumed presidential nominee.
“I
know how hard this job can be, that’s why I know Hillary will be so good
at it,” Obama says in the video. “In fact I don’t think there’s ever
been someone so qualified to hold this office. She’s got the courage,
the compassion and the heart to get this job done.”
The swift
endorsement came after the president met with Sen. Bernie Sanders at the
White House earlier Thursday and the senator from Vermont indicated he
is preparing to exit the Democratic nominating battle.
Sanders has
been under pressure to stand down and help unify the party after a long
and contentious battle with Clinton for the nomination. Obama’s
endorsement will add to that pressure, although most party leaders,
including the president, have urged that Sanders be allowed to decide
his plans on his own timetable.

We’re sorry, this video cannot be played from your current location.

The president’s decision to move quickly to give his public support to
Clinton indicates his desire to begin to play a more active role in
making the case against presumptive Republican nominee Donald Trump as
unqualified to be president and to try to rally those who have backed
Sanders behind Clinton’s candidacy. Clinton and Obama will campaign
together in Green Bay, Wis., her campaign confirmed.In an interview with Bloomberg News, timed to correspond with the video’s release, Clinton welcomed Obama endorsement.
“It
just means so much to have a strong, substantive endorsement from the
president. Obviously I value his opinion a great deal personally,”
Clinton said. “It’s just such a treat because over the years of knowing
each other, we’ve gone from fierce competitors to true friends.”
The
news of Obama’s endorsement was greeted with a tweet by Trump: “Obama
just endorsed Crooked Hillary. He wants four more years of Obama—but
nobody else does!”

“Needless
to say, I’m going to do everything in my power, and I’m going to work
as hard as I can, to make sure that Donald Trump does not become
president of the United States,” he told reporters, as his wife, Jane,
stood behind him.
Sanders said he still plans to compete in
Tuesday’s final Democratic primary in the District, but he added that
“in the near future” he hopes to meet with Clinton — who this week
clinched the Democratic nomination — to talk about ways they can work
together.
His comments suggested that Sanders is preparing to exit
the long and grueling presidential race, as long as leading Democrats
make a genuine effort to incorporate his policy ideas into their broader
agenda.
After meeting with Obama, Sanders vows to stay in for D.C. primary
The
hour-long meeting with Obama came on a busy day for Sanders in
Washington, where he also has an early afternoon meeting planned on
Capitol Hill with Senate Minority Leader Harry M. Reid (D-Nev.), who has
sought to play the role of peace broker at the end of a contentious
nominating contest between Sanders and Clinton.
An afternoon
meeting with Vice President Biden was also added to Sanders’s schedule
for Thursday. The two are set to meet at the vice president’s residence
at the Naval Observatory, said Sanders spokesman Michael Briggs.
“He is seeking out the counsel of people he admires and respects,” Briggs said of Sanders. 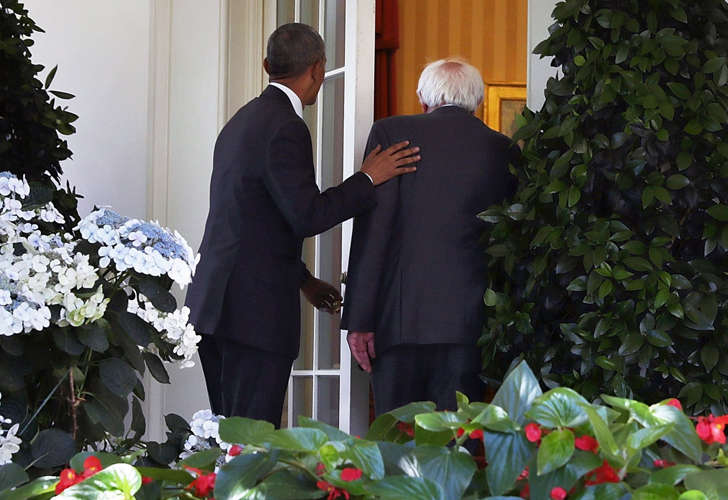